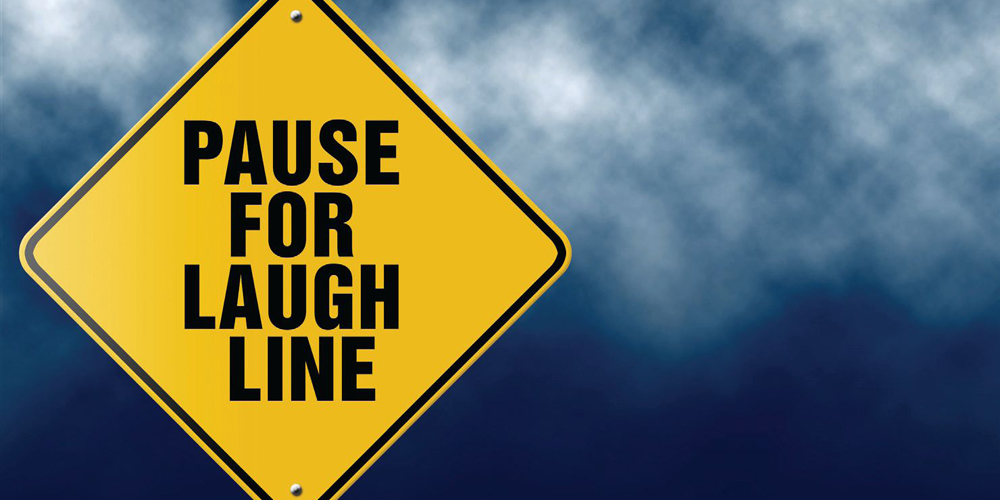 Humor is one of the most effective tools for connecting with an audience. It builds bonds and refreshes the mind. And although the right words can make people laugh, humor is more than just words; its impact is heightened by how you say those words, what you do when you say them, and how you use silence … the pause. The pause adds punch to the punch line.

One of the reasons the pause strengthens your laugh lines is that it builds tension. It’s easier to use comic timing when you understand the relationship between tension and laughter. Let’s examine the link.

Laughter is a natural stress reliever, because when we laugh, muscle tension melts away.

Even in wartime, laughter is used to relieve tension. After a bomb explodes nearby and the dust settles, soldiers in a foxhole sometimes break out laughing. It’s one of nature’s ways of relieving the stress. It’s a safety valve.

Several years ago I witnessed this dynamic in action. A woman was driving her car directly in front of me on a San Diego freeway during rush-hour traffic. The driver of a car to her right, traveling at about 50 miles per hour on the rain-slicked freeway, swerved into her lane. The woman jerked the wheel, causing her car to spin around, and around and around—three and a half times in total! When her vehicle finally came to a stop, it was facing the wrong direction; her car and my car—which also had come to a dead stop—stood hood to hood. As I looked her and her front-seat passenger in the eyes, they both burst into uncontrollable laughter. It’s clear there is a definite relationship between tension, laughter and the release of tension.

Let’s Pause… and Consider the Pause.

How does the pause relate to the tension principle in presenting humorous material? If you’re deliberately building tension, which will culminate in laughter, a pause will heighten the tension and make the laughter more intense.

“Use silence to strengthen your humor and lift laughter to new levels.”

For example, the late Sid Lorraine, a Canadian magician, employed the tension principle to get laughs. Once while performing in Las Vegas, he played the role of a snake oil salesman from the Wild West. His voice started to crack. The longer he spoke, the worse his voice became, until he could no longer speak. Silence. Most people in the audience probably thought, Somebody please give the poor man a glass of water! He then took a drink of his “medicine” and immediately began talking full-throttle. He had caught the audience by surprise, built the tension, extended and strengthened it with a pause, and then reaped the comic’s reward—laughter. Years ago, when entertaining a military group in Alabama, I used the “answer man” technique made famous by American comedians Steve Allen and Johnny Carson. This is where the entertainer holds an envelope to his head, gives the answer, and then opens the envelope and reads the question. I decided to build some tension en route to the laughter.

First came the setup. “The answer is Oscar Mayer, Ball Park and a fighter pilot.” After opening the envelope, I said, “And the question is … name three hot dogs!” By itself, this was a fairly funny line for a group of Air Force officers, some of whom were fighter pilots. But I used it primarily for setting up the joke to follow.

Holding the next envelope to my head, I said, “The answer is … Oscar Mayer, Ball Park and General Willis.” Pause. The tension built to an audible gasp, with people likely thinking, He’s going to call the general a hot dog! The group’s new commander, General Frank Willis, had taken command only three weeks earlier. Opening the envelope, I said, “And the question is … name three franks!” Pause. Tremendous laughter (and relief) filled the room. I built the tension, used the pause to enhance the tension before the punch line, and then used the pause again to let the line sink in.

Of course, there are times when tension is not built through words or a story line. Even then, the magical pause can strengthen the punch line. When used before the punch line, a pause sets up the anticipation of “here comes the funny stuff!” Anticipation is a form of tension too.

The pause plays another important role when used this way. The most important part of the joke is the punch line, and more specifically the punch word. The pause focuses attention on this key element.

The pause also lets people laugh. Years ago, a friend commented, “I’ve figured out why you’re so funny… you insist that we laugh!” She meant that a confident speaker delivers the punch line and then pauses for the laughter because he knows it will follow. Novices often deliver the line and then nervously race on if the laughter doesn’t immediately follow. So dare to be quiet, allow the audience enough time to respond, and your humor will hit the mark.

In addition, use the pause to let your listeners enjoy their laughter to its fullest. Don’t interrupt the laughter while it’s building, and don’t wait until the laughter has completely finished to resume speaking. An audio recording of your presentation will tell you if you’re discouraging laughter by resuming your speech too soon.

You can also magnify a funny line by using the pause to accentuate your physical delivery. For example, you might raise your eyebrows. Sometimes the pause can be used to do a “take,” or a physical reaction to the situation. Some stand-up comics extend the laughter by making slow, sweeping eye contact with the audience, looking from one side of the room to the other.

Pauses add power to the punch line, give the audience time to recognize the humor and then react to it, and draw attention to your physical delivery. Use silence to strengthen your humor and lift laughter to new levels.